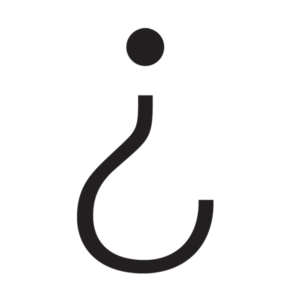 The Burning Road to Mariupol: Attacks from Russia during the Novoazovs'k Offensive of August 2014

This report investigates the claims of Russian involvement in the attacks leading up to and during the assault on Novoazovs’k between 23 and 27 August 2014. The report analyzes open source evidence to determine the source of artillery fire on Ukrainian units, as well as the origin of armored vehicles sighted inside Ukraine in the Novoazovs’k area. 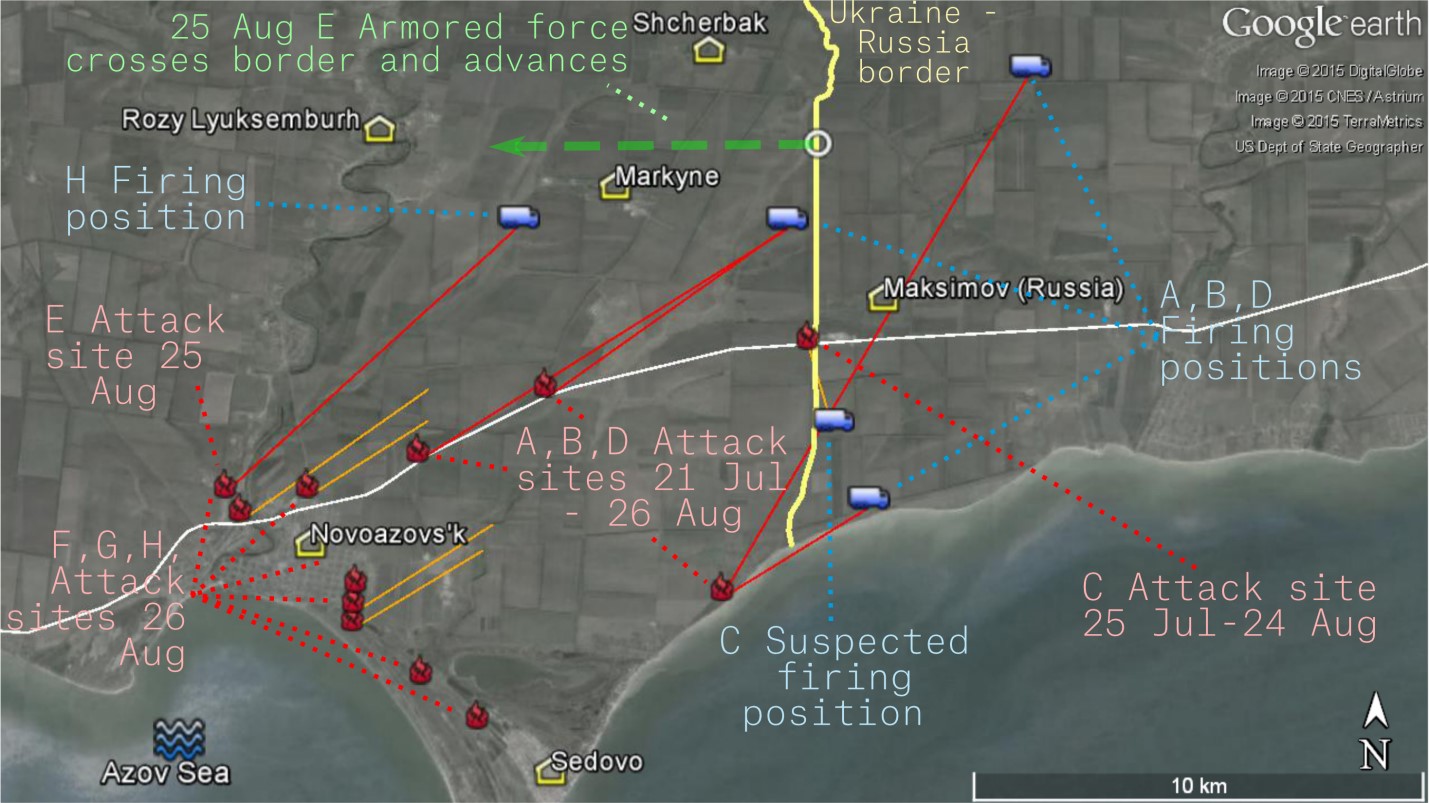 Figure 1. Summary of artillery attacks in the Novoazovs’k region, from 21 July to 26 August 2014. Red solid lines indicate the trajectory of artillery fire that has been matched to a firing point found from satellite or social media evidence. Orange lines indicate a trajectory estimated from photo or video at the attack site – the firing point is unknown. The green line indicates the movement of attacking forces after advancing across the border on 25 August 2014.

In mid-August 2014, Ukrainian armed forces had pushed back the Russian-armed separatist forces to the areas close to the cities of Donetsk and Luhansk. Until this time, the area of the Donetsk region close to Novoazovs’k and Mariupol, overlooking the Sea of Azov, had been spared the worst of the fighting. Before 23 August 2014, Ukrainian forces had sporadically come under artillery fire (on 21 July, 25 July, 21 August); however, there were no clear signs of forces massing in the area at the time to threaten a large-scale attack. This changed on the morning of 23 August 2014, with large-scale and frequent artillery attacks on Ukrainian positions close to Novoazovs’k border crossing point (BCP), which continued over the next few days. By the morning of 25 August 2014, it was clear that towns along the Azov coast were now targets of the Russian-armed separatist forces.

Using evidence from social media and satellite imagery, primarily from Yandex maps images from 31 August 2014, Google Earth images from October 2014 and TerraServer images from 2014 – 2015, we show that artillery attacks and armored vehicles sighted in the area of Novoazovs’k in July / August 2014 came from Russia. On 23 August 2014, Multiple Launch Rocket System (MLRS) fired from Russian territory struck a Ukrainian military base close to the town of Kholodne; more than 30 kilometers from the nearest position of the Russian-armed separatist forces within Ukraine. Soon after, another artillery system within Russia struck the same position. Later, two Ukrainian checkpoints on the road from Novoazovs’k border crossing point (BCP) to Novoazovs’k town were attacked by MLRS fire from a firing position less than one kilometer from the Russian border, with visible tracks leading back to a crossing point into Russian territory, and/or from a position within Russia.

On 25 August 2014, satellite imagery evidence supports media reports and witness testimony that Russian-armed separatist forces crossed into Ukraine through a crossing point (visible on satellite imagery) north of Novoazovs’k BCP, and attacked Ukrainian forces to the east of the town of Novoazovs’k. On 25-26 August 2014, videos and photos show the aftermath of MLRS and artillery shelling of roads, houses, a cemetery, a bread factory and a hospital as Russian-armed separatist forces fought to take control of the town of Novoazovs’k.

The report also investigates the origin of T-72B armored main battle tanks (MBTs) and howitzers that were filmed or photographed close to Novoazovs’k after the town was taken. Building on previous work, we show that two T-72B tanks and one 2s19 Msta-S 152-mm self-propelled howitzer were transferred from Russia to Ukraine in late summer 2014. These two specific T-72Bs and the 2s19 Msta-S were sighted earlier inside Russia, demonstrating that these vehicles were of Russian origin.

In summary, open source evidence shows that attacks on Ukrainian forces around Novoazovs’k came from Russia, and vehicles used in the conflict in the area were transported from Russia. This report adds to the growing body of evidence showing that Russia was directly involved in the Ukrainian conflict of 2014-2015.

This report was written by Sean Case and Klement Anders, with significant contributions from Aric Toler and Eliot Higgins.

The following members of the Bellingcat Investigation Team also contributed to this report:

Thanks to Pavel Aleshin and Dmitry Bochkov for assistance with the translation to Russian. 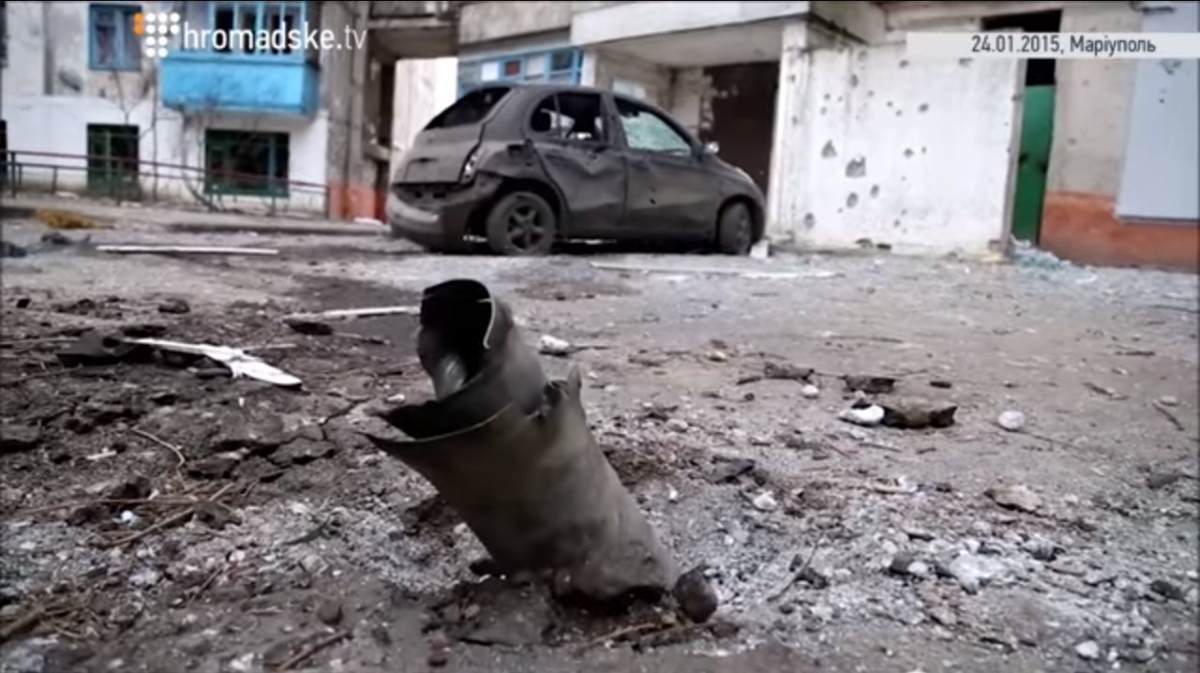 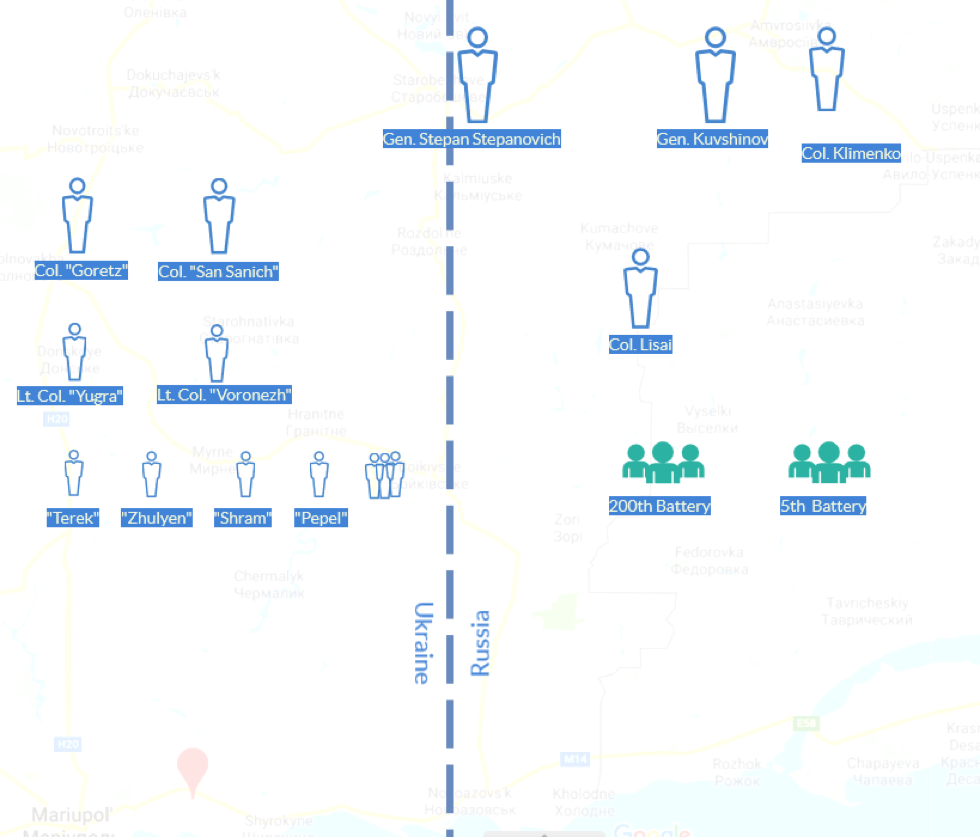